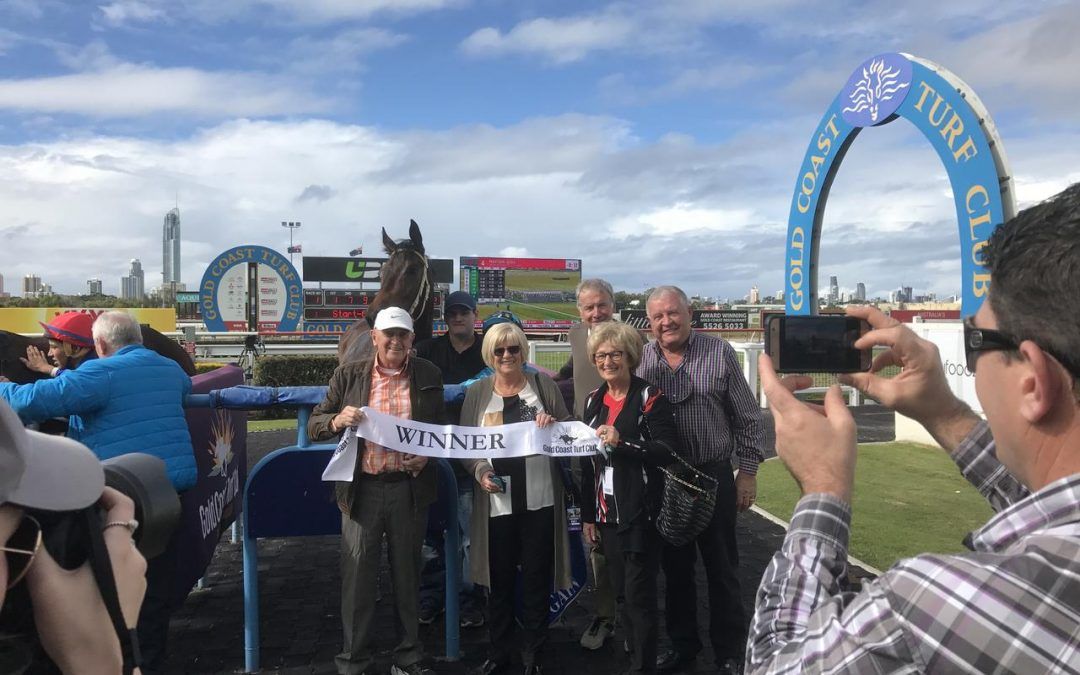 Absolutlypositivly scored at her race day debut by taking out the QT Hotel Gold Coast fillies maiden in impressive style by a length and a quarter and in doing so recorded a new class record. The daughter of Sepoy out of Absolute Dream had trialled well recently at the Gold Coast and brought the good trial form to race day. Jumping brilliantly from barrier one the filly was able to make the horses out wide work to cross her and then was able to sit outside the leader before taking the lead early in the straight and running away with an easy victory. The filly is raced by Aquis Farm and a group of local business people that purchased a share in a charity event at a local surf club, and the happy owners were on hand to see the filly win.

Winning jockey Daniel Griffin was more then happy with the way that the filly found the line in today’s event “I was lucky enough to ride her at the trials and when she trialled so well I was pleased that Bryan and Daniel ran her at the Gold Coast because I knew she would be hard to beat. She gives you the feel of a nice progressive filly, she still did a couple of little things wrong today but clearly had too much on that field, I loved the turn of foot that she showed and I am Absolutlypositivly sure she has many more wins in her”

Winning co trainer Bryan Guy was not only full of praise for the ride but also of the filly “It was a great ride by Dan he came out full of confidence and it’s always great to leg up a confident jockey, and what can I say about the filly. I have loved her from the day we came across her in the Widden Draft at last years Magic Millions National Sale, she stood out and we were lucky enough to be given the opportunity to train her for Aquis Farm”.

Absolutlypositivly will now be aimed at the Aquis Farm Crystal Fillies Plate on Tattersall’s Race Day at Doomben in two weeks time. Co Trainer Daniel Guy explained after the event “We have had the Aquis Farm Fillies race on Tatts Day earmarked for some time and it would be great to give Aquis Farm and their partners in this filly a win in their own race”.

Team Guy also had another horse debuting today at the Gold Coast in Diomedes who finished off strongly to finish third and showed that a win is not far off and continued the Guy Stables good run with two year old this season.