Game Of Dream Scores At Ballina 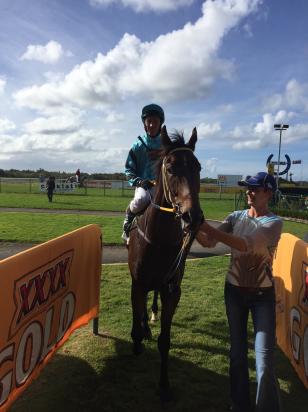 Game Of Dreams continued the recent good run for Guy Racing winning his second start at Ballina Racecourse today. The son of Dream Ahead showed speed from the barrier to settle inside the leader and kicked clear and dug deep late in the straight to win well. Todays win was Game Of Dream's second win from only a handful of starts and he does look to have a bight future ahead of him. Guy Racing will now aim him at more BOBS races in northern NSW in the coming months with Bryan commenting after the win that the stable is perfectly situated at the Gold Coast to capitalise on both BOBS and QTIS bonuses. The stables two other runners on the day both ran well with Bring Me The Maid finishing off well to run fourth which indicated that a win is just around the corner. Leprechaun Lad also finished off strongly to run an eye catching third under 60kg's at his second start for the stable.