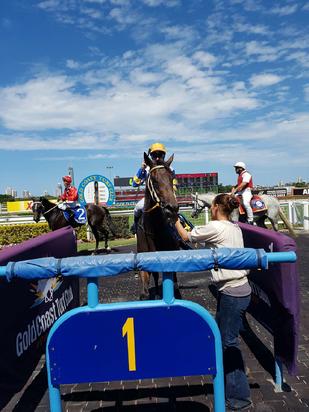 Lefkas Island broke her maiden today at the Gold Coast winning the 3yo Qtis Maiden Handicap in a determined manner. The daughter of Love Conquers All proved too strong in the straight to score a half a length win over the race favorite. Winning jockey Matthew McGuren was full of praise for the filly after the race saying that she showed great determination to chase down the race leader “I knew when we turned for home she would be too strong for the leader because of the way that she fought hard at her first start where she ran a great fifth on the worst part of the track and all she needed to do was to improve a little on that run and she would be the one to beat, thankfully I was right.

Winning co trainer Bryan Guy was over the moon with the win because he believed that the filly had improved enough from her first start to be a force in todays event “I rang the owner last night and told him that I thought she would be a good chance on the way she had done since her first up run and if things panned out how we thought they would then she would be in the finish, and Matt pulled out a great ride to get her home so I am pretty happy.”

Lefkas Island also scooped the pool when it came to prize money as she is Qtis registered and is a filly, which netted her owners the fillies Qtis bonus as well. Lefaks Island is raced by a long time Guy Stable client who has raced horses with the stable since the 1960’s and Daniel Guy was thankful for his support “its rare these days to have a client show loyalty so I am happy that she not only won but picked up the extra prize money, hopefully its only just the beginning.”