PRINCIPESSA FIRST OUT AND FIRST HOME 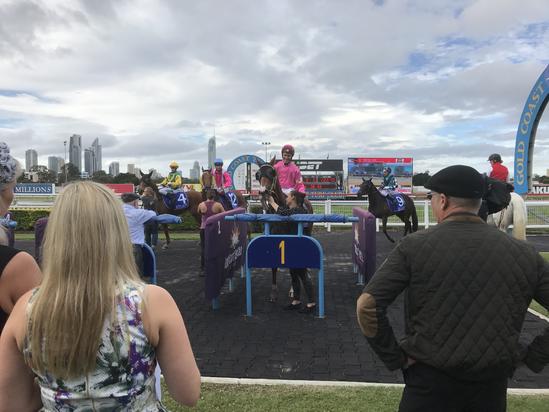 Principessa turned her recent consistent form in to winning form today at the Gold Coast Turf Club in taking out the Wyndham Vacation Resorts Asia Fillies and Mares Maiden. The daughter of Nicconi who was having her fifth race start appreciated the step up in distance to take out the race by a little under half a length. Upon beginning well jockey Daniel Griffin took the filly to the front and she set a strong mid race tempo before kicking clear at the top of the straight and was able to hold her rivals at bay in the heavy conditions. Principessa had shown ability in barrier trials but had not had things go her way in recent races and this was evident, as she was sent out a well supported second favourite. Also of note in todays race was that she had to carry fifty-seven and a half kilos, giving weight to many of her rivals including older mares which made the win even more impressive.

Winning jockey Daniel Griffin said that while Principessa may have only won by a small margin the win was a good strong effort “she really impressed me today, she began well and the plan was to go forward but we were softened up mid race and she still managed to show a good turn of foot at the top of the straight and then showed heart to hang on in the heavy conditions. Bryan and Daniel said to me before the race they could only see the wet track being the issue and thankful they were right and I think she will be even better when they can step her up more in distance”.

Winning co trainer Daniel Guy said after the event it has just been a case of waiting for the filly to grow into herself and find the right race “she has been a little slow to mature but has shown ability since her first day in the stable, she has shown natural speed all along but just wasn’t there and her good barrier trials showed that it would just be a matter of time before we were rewarded with a win. It’s clear on that win that she will appreciate a little further so she does have upside.”

Principessa is owned by Etak Thoroughbreds, which is managed by well-known industry personality Kate Nivison who also raced the half sister Biagiotti. Co trainer Bryan Guy was pleased to train another winner for the Etak brand “Its great to get another winner for Kate, she has been a good supporter of our stable in recent years and this filly only further illustrates the type of horses that Kate breeds, good strong race horses that know how to stand up and deliver, they are tough, handle all surfaces and have the will to win.”