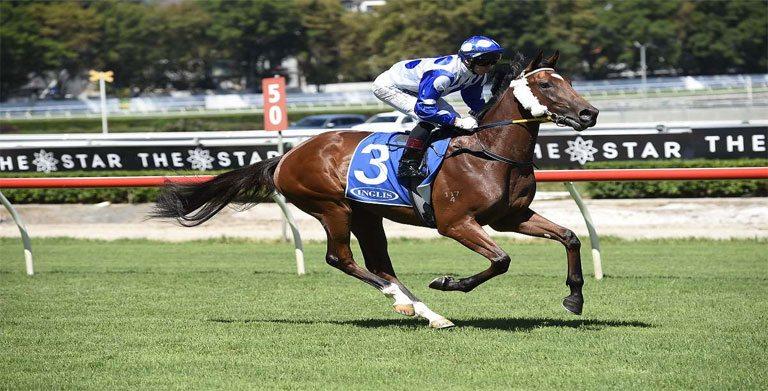 THE training partnership of Bryan and Daniel Guy will make a race day decision whether to start promising filly Nivo in Saturday’s A & T Trading 2YO Handicap on the Gold Coast.

The two-year-old daughter of Rothesay finished second on debut on this track and it looks set for another good effort, but the wide draw has co-trainer Bryan Guy in two minds about starting the $18 chance.

“She’s drawn ordinary on Saturday, I’ve also got her nominated for the race meeting on Wednesday,” Guy said. “It’s only eight nominations at the moment.

“I’ll sum it up in the morning to work out what I’m going to do. See what scratchings are around here.”

Guy isn’t worried about the heavy track Nivo could face on Saturday and will base his decision pure on race numbers.

“That wouldn’t worry me (wet track), the only thing I’m looking at is to see how the field ends up,” Bryan said.

“If it gets a lot of scratchings out of it I’d be mad not to run tomorrow, but if the scratchings don’t come out and it still ends up a big field I’m half thinking about waiting till Wednesday.”

The race in question on Wednesday is the QTIS 2YO Handicap at Doomben which would be a slightly easier option than the talented types it faces on Saturday.

“It’s a QTIS race as well, it’s a Wednesday QTIS which isn’t as strong as the Saturday of course, but I’m up in the air at the moment with her.”

Regardless of what race Nivo lines up in, Guy is happy with how it has progressed since running second earlier this month.

“She’s come through very good and I’m very pleased with her,” he added.

Also on the Gold Coast card for Guy is Slydini in the Perfect Italiano Class 6 Plate. The five-year-old is a relatively new addition to the Guy stables and it should relish the wet track conditions.

“They tell me he loves the wet tracks,” Guy stated. “I’ve only had him two or three runs last preparation after a prep in Sydney.

“I then put him in the paddock, bought him back and he’s raced quite well, in fact he’s raced really well this time in.”

The son of Magic Albert has finished third and fourth in two starts this month and the drop back in distance looks ideal.

“We freshened him up to bring him back to the 1400m. If we get more rain, which they are predicting, it should suit him down to the ground,” Guy said.

“We’re a heavy 8 at the moment, but they’re talking about more rain coming in tonight.”

Team Guy has another talented runner in the stables with Junction. The two-year-old gelding by Real Saga scored a handy win at the Gold Coast on debut before taking on some of Sydney’s best in the Inglis Classic.

Junction battled on well for fifth behind Golden Slipper contender Frolic before being put out to spell for the upcoming Brisbane winter carnival.

“We got all that hot weather down in Sydney. He travelled down, travelled back and I just thought he did a pretty good job his last preparation,” Guy said.

“He won first up then we went down there and I thought he went quite a nice race. He was in the worst part of the track and he battled on quite nicely.

“We decided to bring him home, put him in the paddock and we’re giving him till the end of the month.”

Guy will be targetting the QTIS races towards the end of the carnival for the gelding which looks to have plenty of natural ability.

“We’ll get him back into work and he’ll be ready for the later part of the carnival up here where there’s some nice QTIS races on,” Guy said.

“He’s eligible for the QTIS bonus so we’ll try and win a couple of those late in the carnival. We’ll just wait till the end of the carnival, give him a nice break after doing a pretty goo job down there.”

The gelding was purchased out of the 2016 Inglis Classic Yearling Sale by a big team of owners which includes Wylie Dalziel (manager of Wylie Dalziel Roy Higgins Racing) and Peter Moody.

“We bought him out of the Classic Sale in Sydney. We paid $55,000 for him and believe it or not, we didn’t go down looking for a Real Saga,” Guy admitted.

“There was a couple there we liked, but we didn’t have the money for those so we settled on him and it looks like we’ve done the right thing because he goes alright.

“We’re hoping he comes back and shows us what he showed in the first preparation.”

Story courtesy of horsebetting.com.au and written by Daryl Curnow