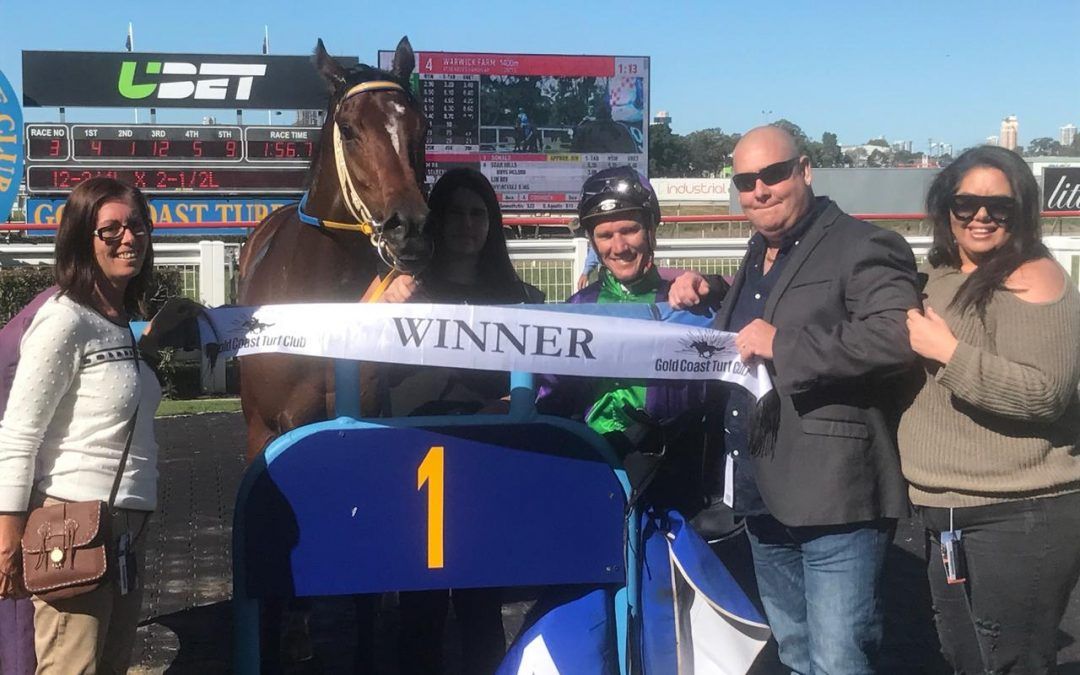 Angela’s Beauty broke her maiden in fine style today at the Gold Coast Turf Club in taking out the Pat Welsh Maiden Plate. The daughter of Daliapour appreciated the 1800 metres of today’s event and was also at home on the heavy conditions. Sent out equal favourite for the race the filly settled just off the pace after finding a good position from an awkward barrier. Angela’s Beauty also provided the Ikin family with their first win in racing and they were on hand to not only witness the event but to soak up the feeling of being in the winners stall.

Winning owner Steve Ikin was over the moon with today’s win and while the filly was racing well was starting to wonder if he would ever get to feel what it was like to win a race “I can’t believe it it’s great to finally get in the winners stall, I thought it would never happen, she has been unlucky her last few and all we needed was a change of luck and thankfully it happened. I am so happy all the family are here to enjoy this day, my wife Mandi and daughter Kourtney we love our horses and to get the winner is such a good feeling. I would like to say thanks to Dan Griffin on the great ride and to the Guy Stable on their efforts to make this happen”.

Winning jockey Daniel Griffin explained after the event that while the win was a strong win he feels that the horse still has improvement in her “I have ridden her a few times now and haven’t had the best luck so I am grateful to the connections for their loyalty and patience and I think that they have a filly with a nice future. She still has a lot to learn and with maturity and race experience she will develop into a handy staying mare”.

Winning co trainer Bryan Guy was full of praise for Daniel Griffin’s ride today “We spoke before the race and what I said was exactly what Dan did it was a text book ride from the king of the coast and what a day for the Ikin family getting their first of what is hopefully many winners. They are relatively new to the game and this is the first horse we have trained for them so I am over the moon to be a part of their special moment. It’s so great to see the enjoyment that families like the Ikin’s have shown when they get a winner, it’s what makes the early mornings and long days worth it, it really gives you a buzz”.